The Gaze on Agbogbloshie: The misrepresentation of West Africa as dystopia

This project intends to explore the misrepresentation of Agbogbloshie and the resulting socio-economic reality. Agbogbloshie is portrayed as the continent’s largest electrical wasteland; in truth it is a functional, profit-making recycling network. The conditions are harsh and pollution is rife but its inhabitants manage to live, work and save money for their families. In the last decade, Agbogbloshie has received an influx of western media attention depicting the displaced African as an aesthetic. The area receives regular visits from European journalists, academic researchers and photographers who frame their works according to a historical distortion of the African identity. The young boys who reside on the site are the most exploited group in the informal hierarchy of the recyclers. Images, interviews and even blood samples have been obtained in exchange for help. However, the majority of these researchers do not return or contact the boys after the data has been collected. The alienation felt by the boys is cultivated through these researchers who present the cultural baggage of European idealism within their projects. Through an inquest of interviews, visual methodology and fieldwork, this exposition has attempted to challenge these misrepresentations. The western gaze, that which perpetuates the archetype of Agbogbloshie as a dystopia, has overridden the ethics of planned obsolescence embedded in digital commodities. The work intends to exaggerate these discrepancies creating an embellishment of the visual aesthetic whilst confronting our obsession with African poverty.

"Ok. The White people also come, they will come here and say they will give...

“You know psychologically now they don’t trust because the journalists are always promising and all... 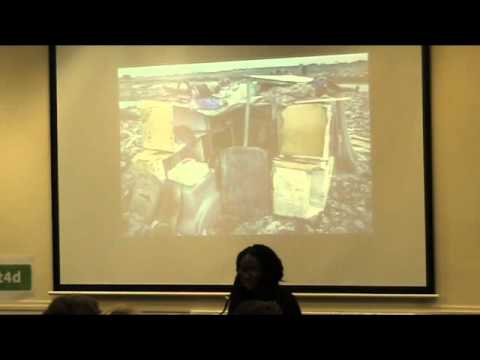